Did Anushka give her green saree to Imari?

Anushka Sharma had recently shared pictures with cricketer-husband Virat Kohli from Glenn Maxwell and Vini Raman’s wedding celebration. The actress looked stunning in a pink desi ensemble. And recently, pictures of cricketer Faf du Plessis and wife Imari attending the same wedding have surfaced on the internet. Interestingly, fans were quick to note that Imari was wearing a stunning green and golden Chanderi saree, which was previously worn by Anushka Sharma. 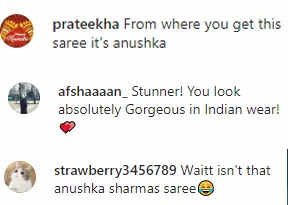 While complementing Imari’s saree, a few users commented how it was similar to what Anushka had worn at an event in 2018. One user wrote, “From where you get this saree it's anushka” while another netizen commented, “Waitt isn't that anushka sharmas saree.” Anushka Sharma had also hit like on this charming post shared by Imari.

Ahead of 34th birthday, Anushka Sharma shares stunning pictures of Instagram
Anushka Sharma had tied the knot with Virat Kohli in 2017. This private wedding was hosted at Lake Como. In January 2021, Anushka and Virat turned parents with the birth of their daughter Vamika. On the work front, Anushka will soon be seen in ‘Chakda Xpress’ which is based on the life of cricketer Jhulan Goswami. Announcing the project Anushka had shared, “It is a really special film because it is essentially a story of tremendous sacrifice. Chakda Xpress is inspired by the life and times of former Indian captain Jhulan Goswami and it will be an eye-opener into the world of women’s cricket. At a time when Jhulan decided to become a cricketer and make her country proud on the global stage, it was very tough for women to even think of playing the sport. This film is a dramatic retelling of several instances that shaped her life and also women’s cricket.” ‘Chakda Xpress’ is directed by Prosit Roy and will be released on an OTT platform.